The Cold War lasted from the end of World War II right up to the early 1990s, although the Soviet Union and the USA never actually engaged in direct battle. Instead, the Cold War was expressed through weapons development (the nuclear arms race), technological development (the space race), espionage and propaganda.

Western democratic states churned out huge amounts of propaganda material throughout the First and Second World Wars, but practically decommissioned their propaganda machines post 1945. This is why most of the posters that we explore below have emerged from the Soviet Union or independent political activist groups, and not the West.

The posters in this article have not only been selected on the basis of their highly creative and original content, each one also conceals a message. In some cases the message is blindingly obvious. In other examples of poster printing, the message can only be deciphered once the poster has been placed in its historical context. 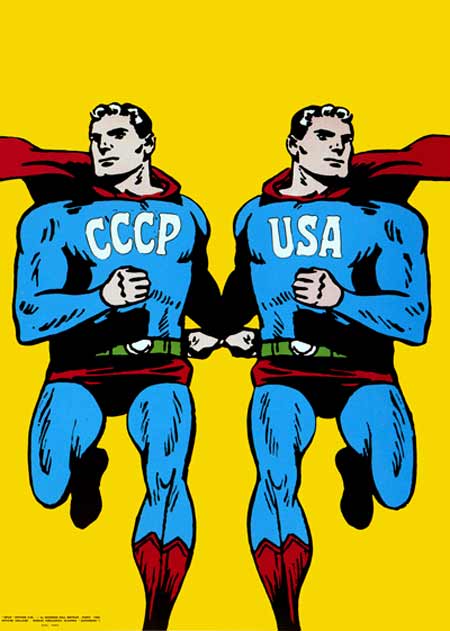 This poster, which appears on the front cover of David Crowley’s “Posters of the Cold War” book, depicts the USA and USSR, side-by-side, as identical Superman characters. It implies that each nation is simply a mirror image of the other and that both are equally harmful and destructive. Cieslewicz uses the Superman character as a symbol of masculinity, machismo and the ridiculousness of the Cold War in general. 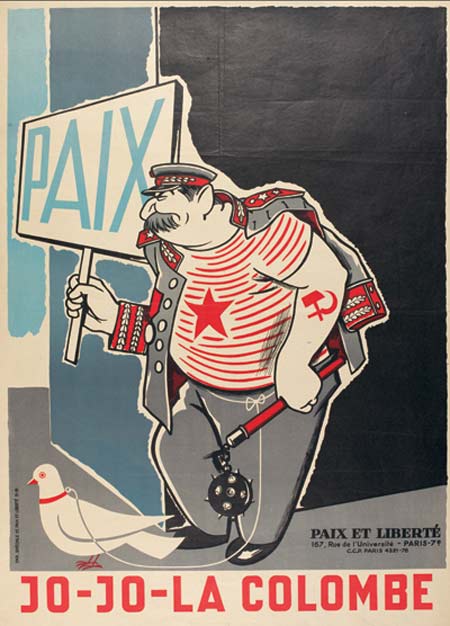 French anti-communist group, Paix et Liberté, created this poster, which openly mocks Stalin’s advocacy of peaceful values. Stalin is depicted as a peace protestor with sinister motives, holding a “Peace” sign in one hand and a bommy-knocker in the other. 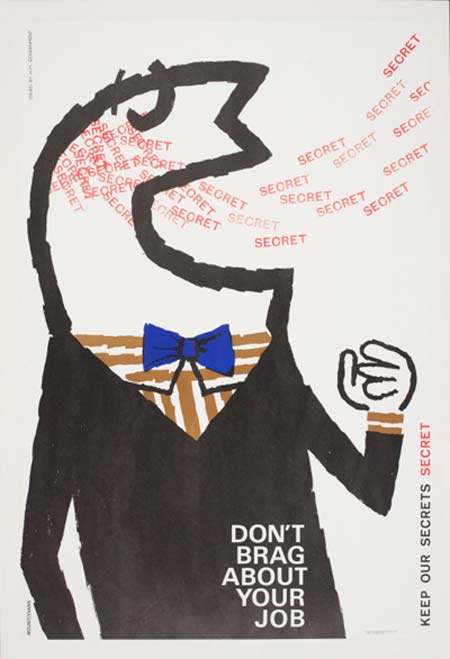 This British poster was displayed in government and military offices throughout the country. Although it carries no explicit anti-communist message, we can safely assume, given that it was published in 1960, that it warns against the presence of Soviet spies. 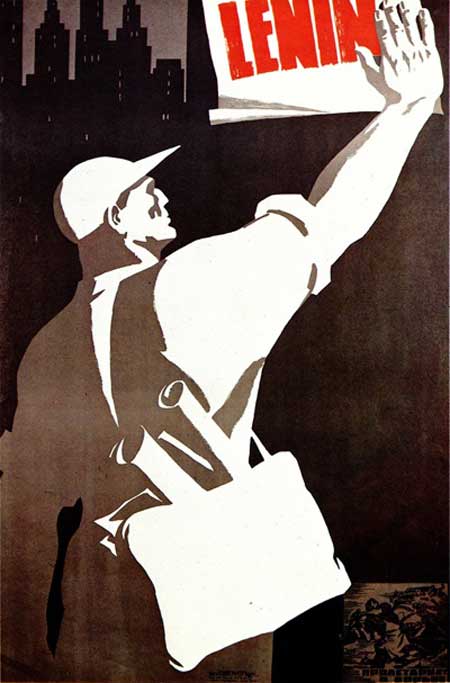 The Soviet Union was keen to promote a positive image of itself throughout the early 1970s against a backdrop of the Vietnam War and a highly volatile relationship with the USA. Posters such as this helped to keep Lenin’s political ideologies alive. With no slogans or foreign words whatsoever, this poster was clearly designed for a European and American audience. Published one year after Stalin’s death, this poster reinforces the message that Soviet research and development of weapons and machinery is ongoing. Substantially funded by war reparations from Germany, the Soviets were able to build the MiG-9 Fargo turbo fighter in 1946 and the Yak-15 Feather attack aircraft in 1947. The red stars in the image above symbolise the pilot’s kill score. 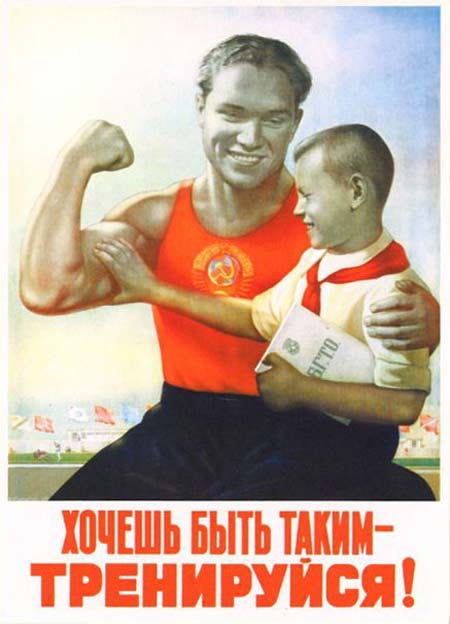 The Soviet Union wanted strong citizens who could work for the benefit of the Motherland. The BGTO training programme was introduced in 1931 and included gymnastics, sprint and long distance running, long and high jumps, discus, javelin, swimming, cross-country skiing and sharp shooting. The boy in the poster above is carrying a book of BGTO standards. 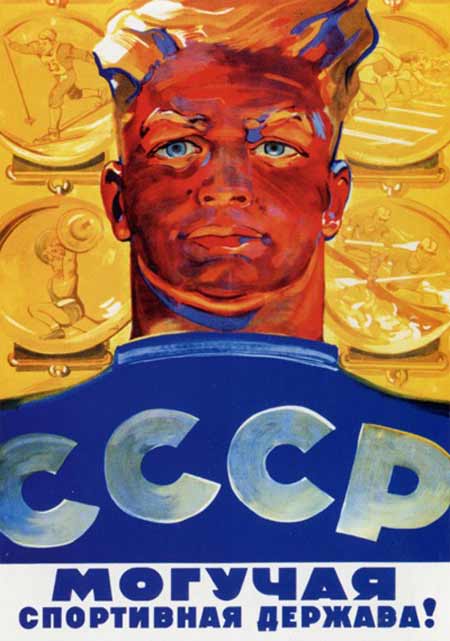 By 1962, sporting events such as the Olympic Games had become hotly contested between the Soviet Union and the USA. Each was desperate to win in order to demonstrate their power and dominance over the other. In the 1956 and 1960 Olympic Games, the Soviet Union was victorious. The character in this poster has been painted to resemble an Olympic torch, with gold medals in the background. 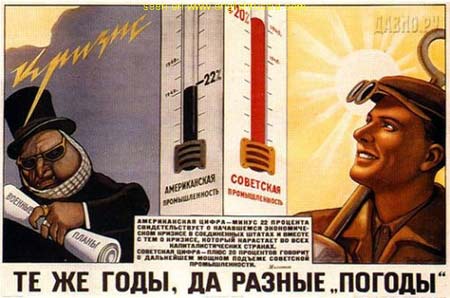 As dark clouds loom over the USA, the USSR bathes in glorious sunshine. The black thermometer shows the “American Industry Rate” pitched well below the “Soviet Industry Rate”, which is displayed on the red thermometer. The information box at the bottom tells of an American economic crisis. 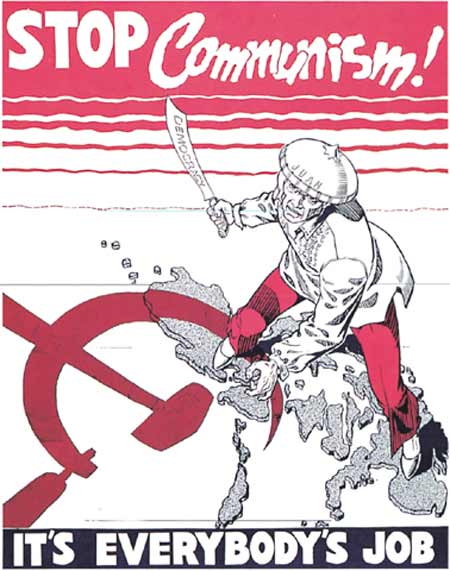 Rightly or wrongly, the West perceived nationalist movements in many countries and regions around the world to be allied with communist groups and supported by the Soviet Union. The most notable of such movements appeared in Guatemala, Iran, the Philippines and Indochina. This poster shows a Soviet-backed, machete-armed aggressor trying to exert influence in the Philippines. 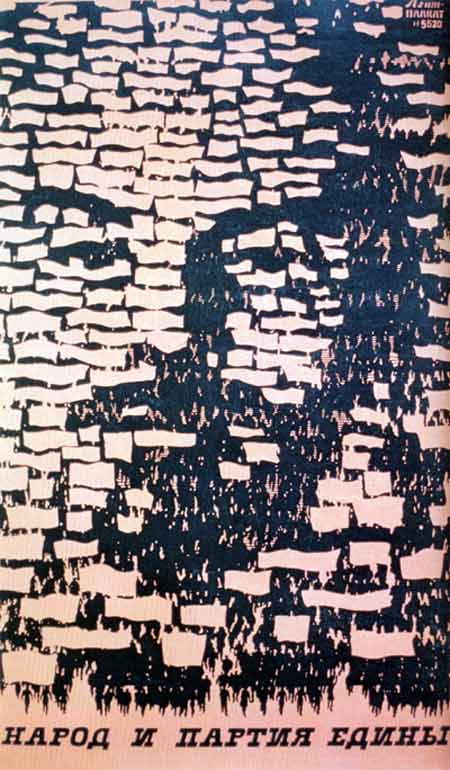 In this poster, banners carried by marching Soviet citizens create a somewhat subtle image of Lenin’s face. The caption reads “People and the party are undivided.” This famous Soviet slogan first appeared in Pravda, the leading newspaper of the Soviet Union, on 8 March 1953, just three days after Stalin’s death.