All photographers are liars

My title does sound too strong, but I think it reveals something about the massive use of photography by newspapers and magazines as a the ultimating tool for stating that what they are writing is true. Photos are obviously not a reflection of reality, far from it.

The examples that you can see in this article, whether it’s the MySpace cropping above or the set up Georgia pics, are blatant lies. However I think that the essence of photography is leading to permanent lies. Following are some of the factors that make

A Georgian photographer working for Reuters, David Mdzinarishvili, recently staged photos to feed the western medias with pictures attesting that Russia committed atrocities in Georgia. You get two examples of the manipulation here, and you can also take a look at this russian analysis of two other pictures, with a guy acting in different situations.

The images shown here were published on Reuters website, some have been taken off the site afterwards. Anyway it’s not new to set up pictures to influence the public opinion, it was done in Bosnia as well. 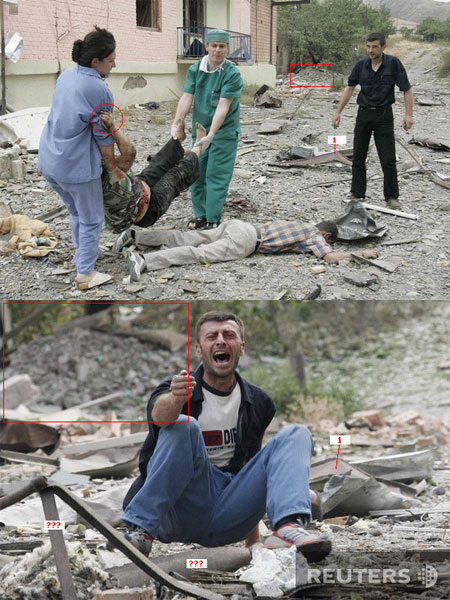 The first picture above was captioned: ” Dead woman being carried away by the georgian soldiers from the town of Gori”. However the dead woman holds on to the nurse. Reuters changed the caption afterwards. The second one shows a screaming desperate man sitting… at the same place where the first one was shot. 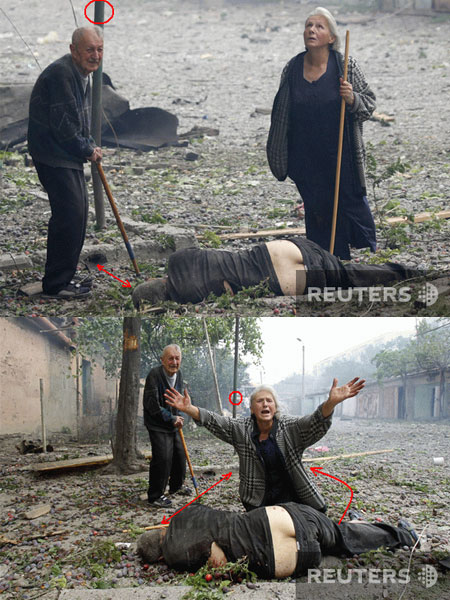