Is Adobe Muse the new Frontpage?

Earlier this week Adobe announced Adobe Muse, a new product that promises its future users they will be able to create drag-and-drop web design. The users targetted by this software are mostly graphic designers who use other programs of the Creative Suite, but don’t know how to code websites (and don’t want to learn). Think of it as InDesign for the web.

At first, I thought it was a good idea. When you look at the features or the demo video, it also looks great and you want to try it. The problems start when you take a look at the code outputted by Muse, it’s just aweful!

This is where web designers and web developers decided to give their opinion. Oaddit on Reddit posted about Adobe Muse’s source code, then a discussion followed, with a lot of ironic comments about the sever divitis case Adobe Muse is suffering.

Some bloggers have also been criticizing Adobe’s latest product, not only about the code output, but also about the global direction Adobe is taking with this tool. The best review of Muse is probably the one written by Elliot Jay Stocks.

The only positive review I have read so far is the one on Mashable, but I have to say that I disagree with a lot of their comments. 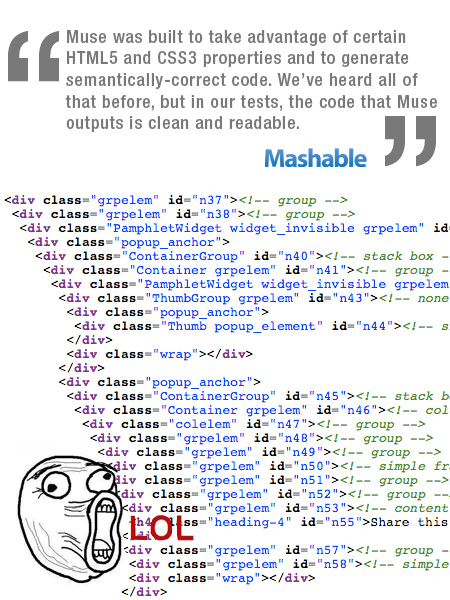 In the webdev subreddit, user IAmaRobotBeep, who seems to also be a web design teacher, took the time to create a clean HTML-CSS version of the site. The difference between the two versions speaks for itself, the 1500+ lines of HTML of the Adobe Muse website turn into 105 lines. Enough said. If you want to take a look for yourself: the original site – the reworked version.

Does this new tool look like something you could use? I’m especially interested by graphic designers’ opinions, after all they are the ones Adobe wants to use Adobe Muse.